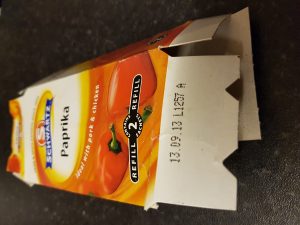 Use-by dates creep up on you. It comes to everyone, of course.  The old year passes and the new one reminds you that time and tide aren’t waiting.  Over the decades one has been through the cupboards of one’s parents, surreptitiously discarding all those items clearly past their use-by dates.  And then it happens to you.  Nothing prepares you for the toe-curling embarrassment as a daughter, back home for Christmas, takes huge amusement from clearing out jars, packets, and tins.  To be fair, most had use by dates between 2014 and 2017, but there were enough that were more than a decade past their peak to make the exercise an uncomfortable one.  Oh, how the tables were turned.  We were the future once – Et in Arcadia ego, as they say – and now it was our turn to make excuses about how spices never really go off.

The arrival of a new year often separates the half-fullers from the half-emptiers. Introspection can lead some to think that their best days are behind them.  At work, all the talk is of AI, Robots and those pesky millennials coming along and taking our jobs.  Cabinet reshuffles aim to bring in new blood.  Age, once seen as synonymous with experience and wisdom, is now often bracketed with black & white tv, and tradition has become a dirty word. Perhaps there is time to hang up one’s boots. (As a case in point, the combined age of the three front-row forwards of the rugby team I support, Cardiff Blues, is 120.  And they’re called the Blues as that’s what you get from watching them.)

But the truth is that many of our skills and cognitive approaches do have a use-by date.  Often what got us to where we are might not be what we need to get us to where we want to go.  The old paradigm of learn-work-retire is no longer fit for purpose.  As people live longer (and as health costs outweigh increasingly pitiful pensions) a thirty-year retirement doesn’t make sense, and nor does the idea that once you pass twenty all learning stops.   Whether it’s the impetus provided by a new year or not, we all need to pause and rethink what we need for the next stage of our lives. And, yes, that may even mean ditching some of our legacy thinking and attitudes. Reappraising allows us to refresh, and then to reskill, retrain, rewire our thinking and then reboot our lives.

Much is made of how few people stick to their new year’s resolutions.  Some blame their lack of willpower.  I’m more like P G Wodehouse who said: “It is true that I have a will of iron, but it can be switched off if the circumstances seem to demand it.”  The reality is that rather than seeing personal change as a one-off, the mindset needs to be one of continuous improvement.  None of us need to reach our use by date if we make sure that we always refresh and retrain and commit ourselves to lifelong learning.

And for your bonus track, here’s the peerless Michael McIntyre’s Spice Rack gag.